Our breathing bags are supplied in 4 different sizes. Just pick the required size from the drop-down menu located below. These breathing bags are a completely new approach to the shipping of live fishes and aquatic invertebrates. If there are any questions you have then please get in touch before you place an order.

The breathing bags allow the transfer of simple and complex gas molecules through the plastic wall of the bag – carbon dioxide and oxygen in particular, as well as other gases – providing a true «breathing» bag in place of a «barrier» bag as is used in plastic polyethylene bags.  As long as there is a breathable atmosphere outside the Breathing Bag, the animals inside will not run out of oxygen.

Carbon dioxide exits the bags at 4 times the rate oxygen enters the bags, thereby constantly purging the water of toxic carbon dioxide, and allowing oxygen to replace it in the water.

After adding water and fishes, seal the bag with as little airspace as possible except for those few kinds of fishes that are made uncomfortable by the lack of air space at the surface. Fishes adapt readily to the lack of airspace and it is not needed. It is best if there is no air pocket in the bag so that there is no water movement, keeping the fishes calmer. 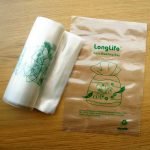